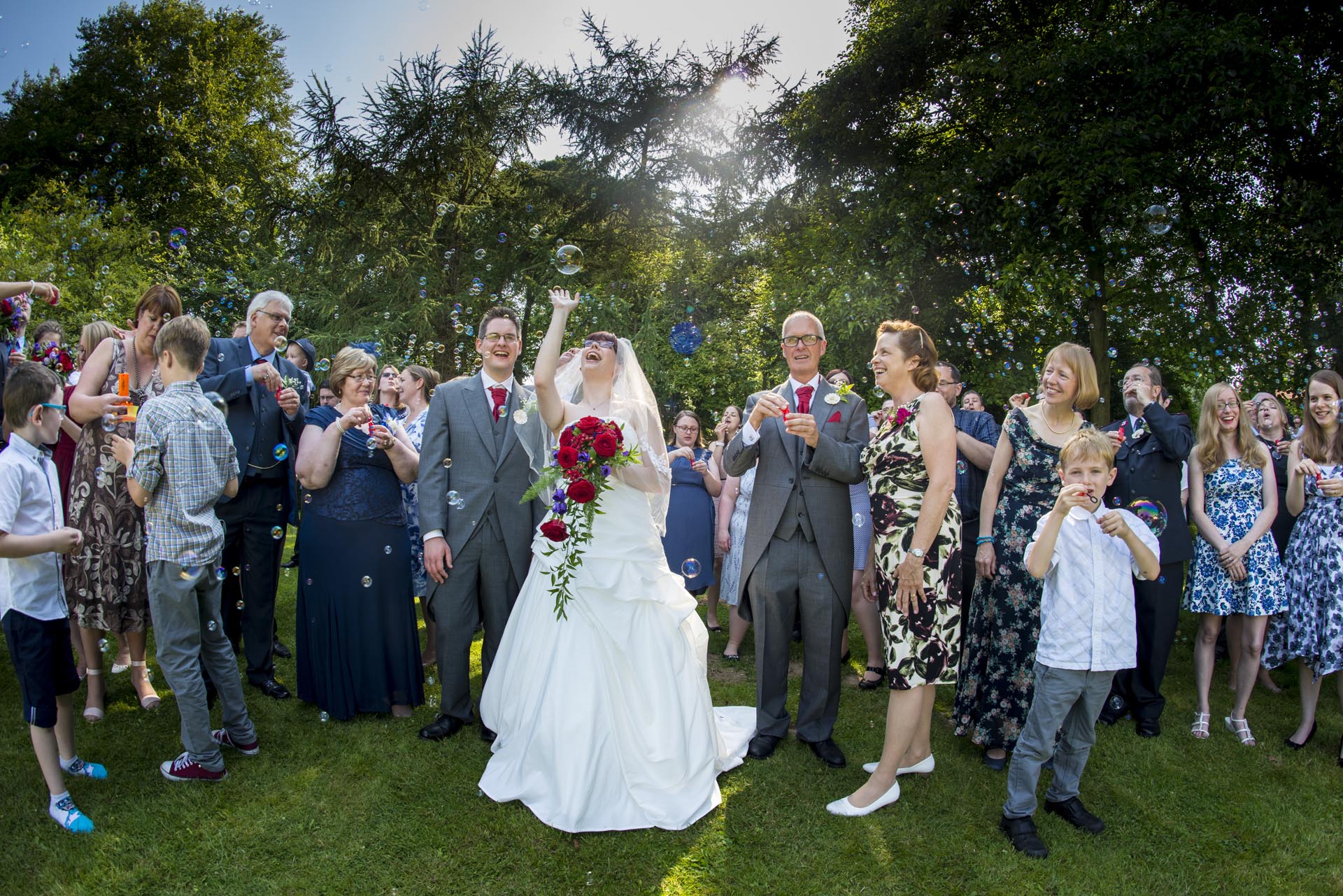 If the 24-70mm f2.8 is the main workhorse in most wedding photographers’ camera bag, the fisheye lens may seem a very odd one to use at a wedding! I tend to think of the photos from my different lenses like ingredients in a meal: if the 24-70 is meat or potatoes, the fisheye is definitely a strong herb or spice – to be used sparingly but can add huge interest and flavour.

The Fisheye lens I use with my Nikons is the Samyang 12mm 2.8. This lens offers amazing sharpness, and is great value for money. It is a manual lens when it comes to focussing, but that is not nearly as critical with extreme wide angle lenses as so much is going to be in focus anyway. Although sharp at f2.8, I tend to use it at f4 or 5.6. My only criticisms of it would be that it seems to shoot less bright than my Nikon lenses (if I am using -0.3EV on the 24-70 I will go to +0.3 with the fisheye) and the colour tone is a tad bluer than the Nikkors. That can all be dealt with in Photoshop, though. 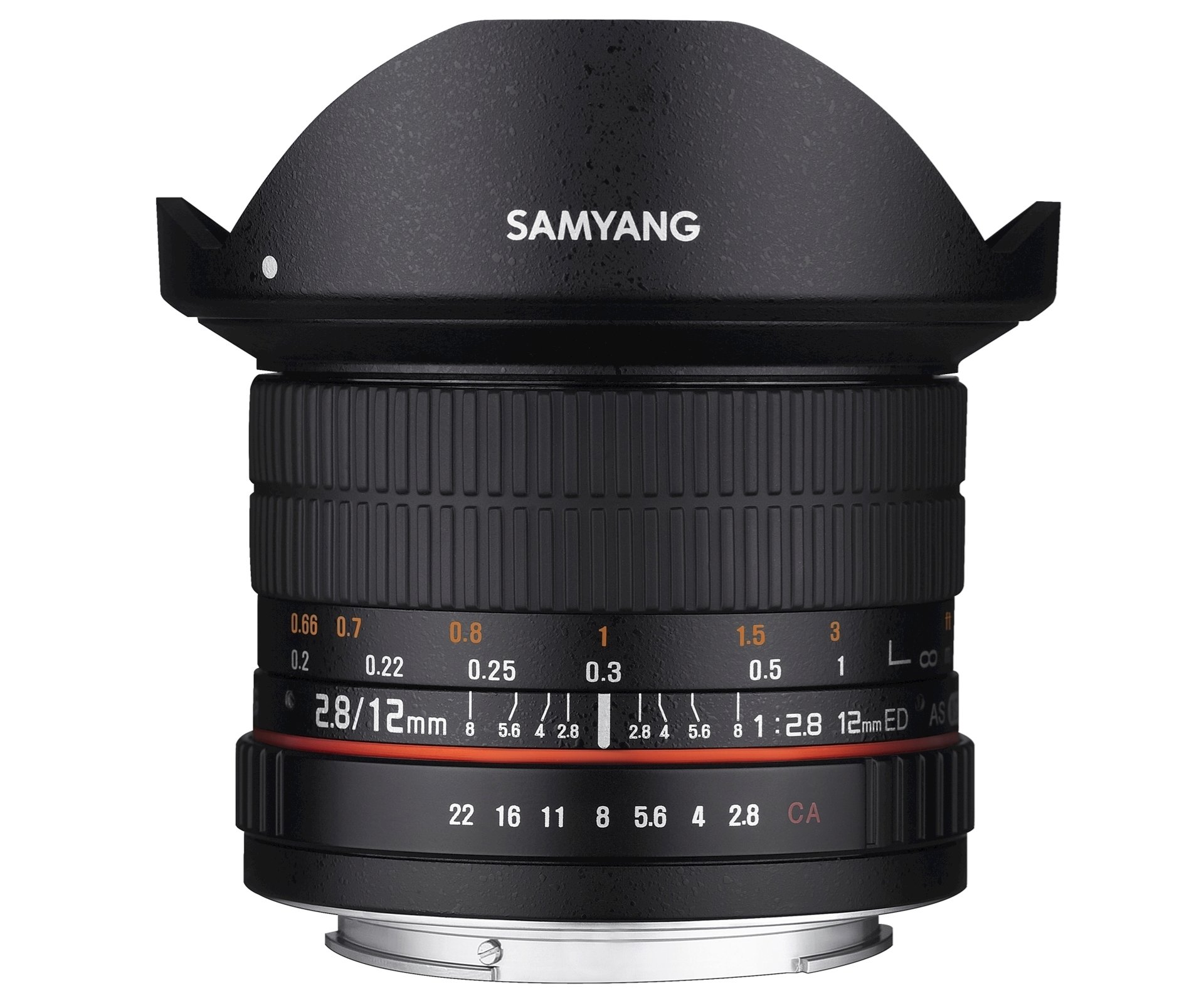 A wedding photographer's tools: What is a fisheye lens?

What exactly is a fisheye lens? The term was first used in 1906 by American physicist and inventor Robert W. Wood, based on the angle of view that a fisheye sees underwater. Most descriptions of fisheyes emphasise severe distortion, but I tend not to see them in quite that way.

A fisheye lens is an extremely wide angle lens. Many budding photographers are obsessed with very long, telephoto lenses, but the real magic and technical challenge of lens making seems to me to be at the wide end.

A lens has to “map” a 3D scene onto a flat film or sensor. The wider the angle, the harder it is to squeeze the outside of the shot onto your sensor. A standard, or “rectilinear” wide angle lens keeps straight lines straight, but to do that in a wide field of view it has to increase the apparent size of objects at the edge of the image. That is in itself a kind of severe distortion, but our eyes don’t see it as such if the lines are straight – until the bridesmaid at the edge of the picture looks like a rugby forward!

I tend to think of the fisheye as a wide angle which, yes, curves the straight lines, but avoids that size distortion. The church may seem very curvy – but the bridesmaid is her proper size! There is a lot to be said for that. 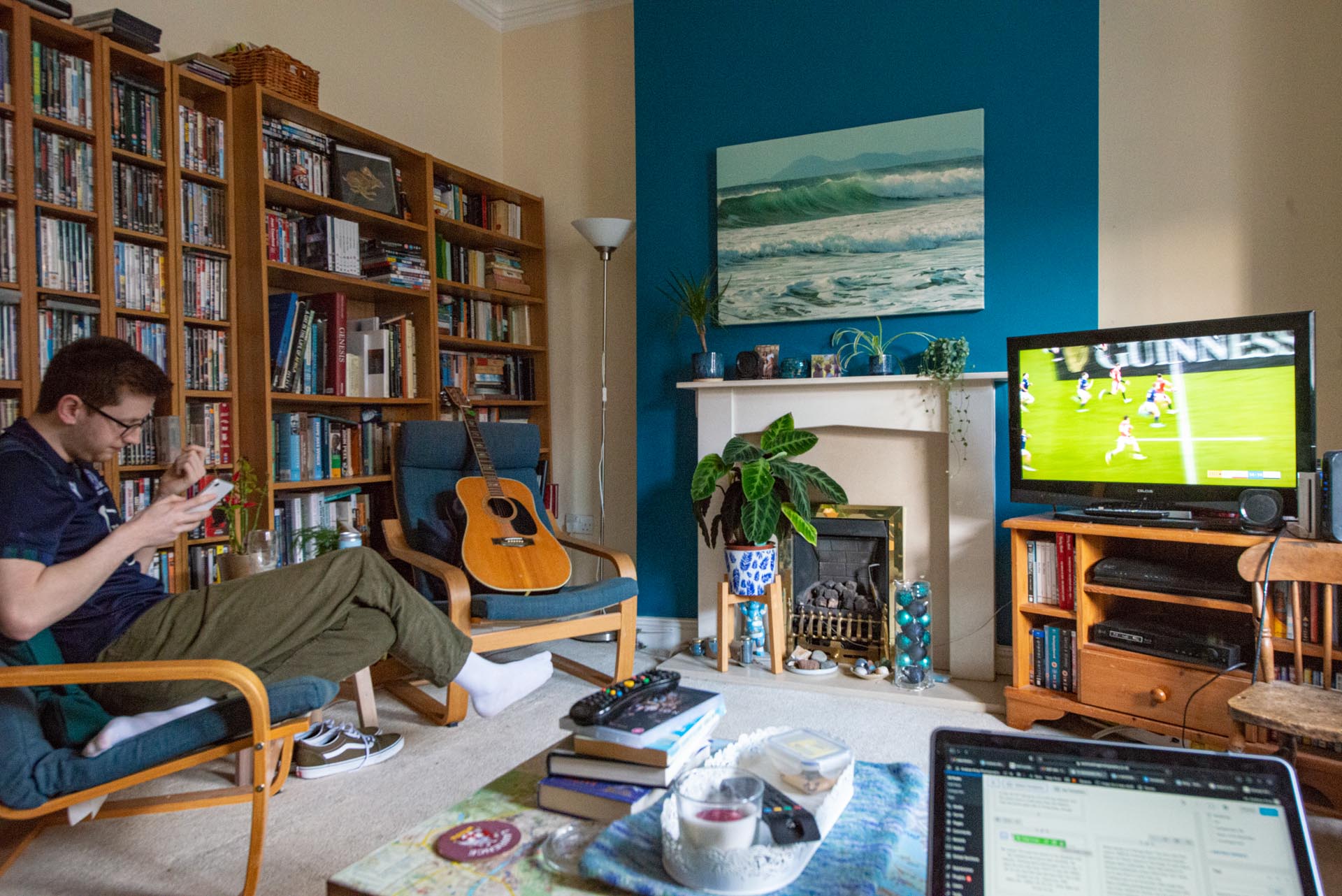 The room where I am working on my blog, and simultaneously watching the Six Nations! This view is at 24mm – what I would have thought of as a wide angle lens back in film days. 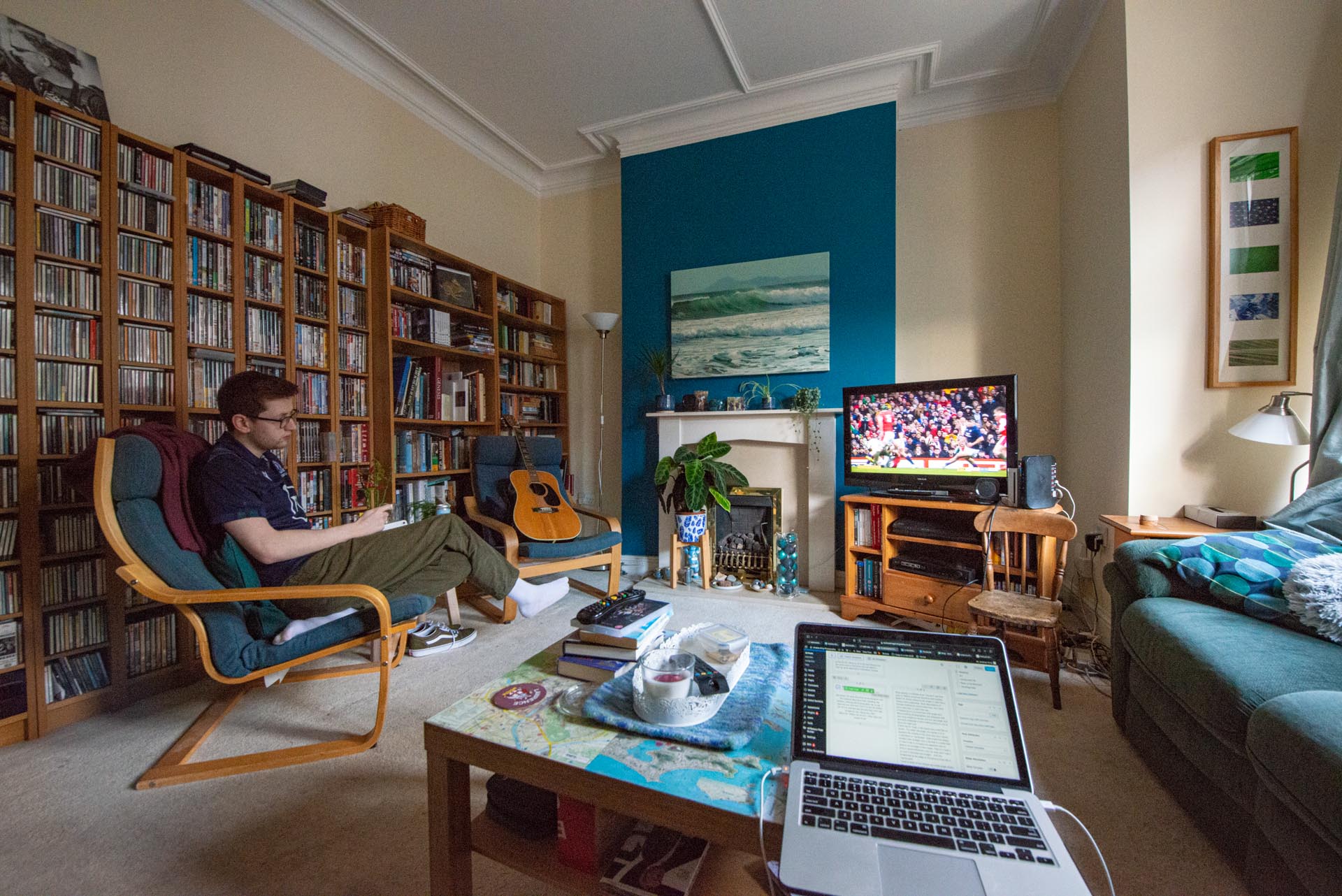 The same scene with a 14mm rectinlear. This is actually the same lens as the previous shot, the Nikkor 14-24mm f2.8 zoom, which will soon get an article to itself. 14mm is “extreme wide angle” in modern terms, for a rectilinear lens. 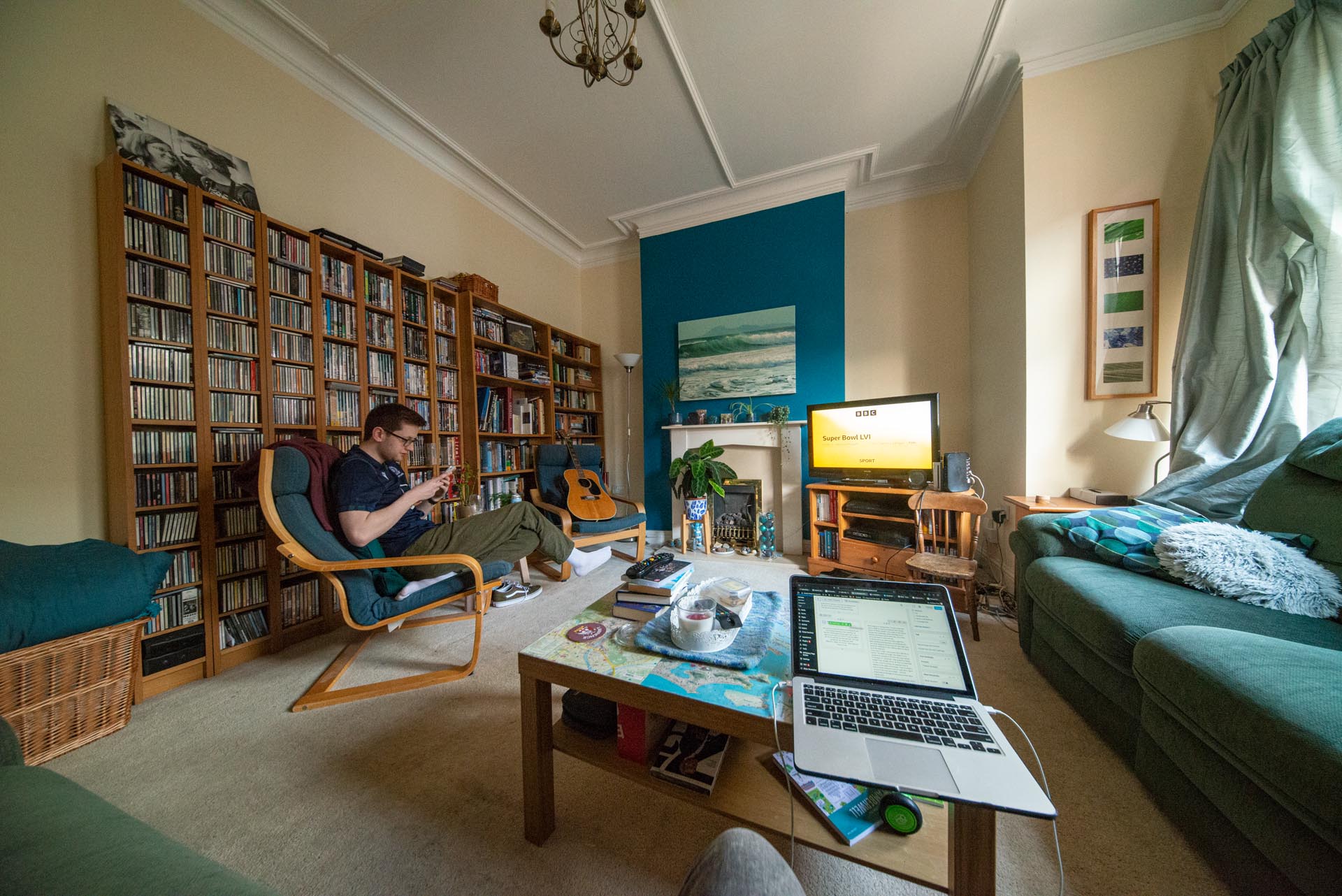 The amazing Samyang 10mm f3.5 rectilinear. This stunning lens is the most extreme wide angle rectilinear available for full frame 35mm cameras and is my favourite for my interiors work. Lines are dead straight – but objects at the edges are pulled a long way. Check out the shape of my laptop! 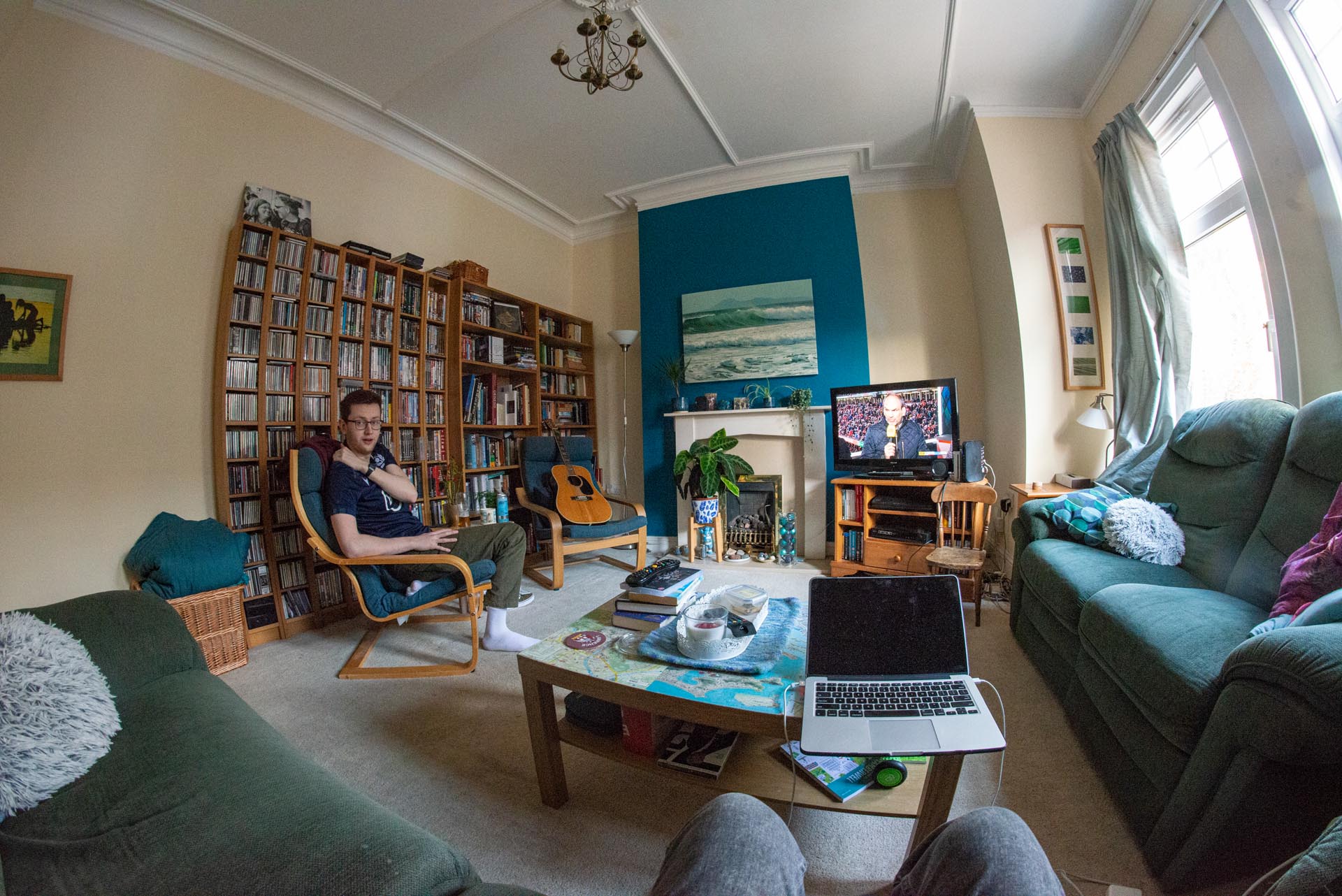 The Samyang 12mm fisheye. This lens is about half the price of the 10mm, and has a far wider angle of view. No size distortion at the edges either, but plenty of shape distortion, with lines turned into curves.

These days, anyone can take the fish out of a fisheye

That isn’t the whole story, though. These days, anyone can take the fish out of a fisheye. As soon as you pull your images onto a computer, you have the option of applying lens corrections. All lenses need them, but fisheyes have the option of being “corrected” to the point where they become rectilinear.

The fully rectilinear correction of my Samyang fisheye is not pretty, but there are in-between the extremes compromises available. Without fully pulling the lines straight, they can be straightened enough to basically fool the eye, without significantly losing quality or all the benefits of having your subjects at a reasonable size. Check out the next two sample shots. 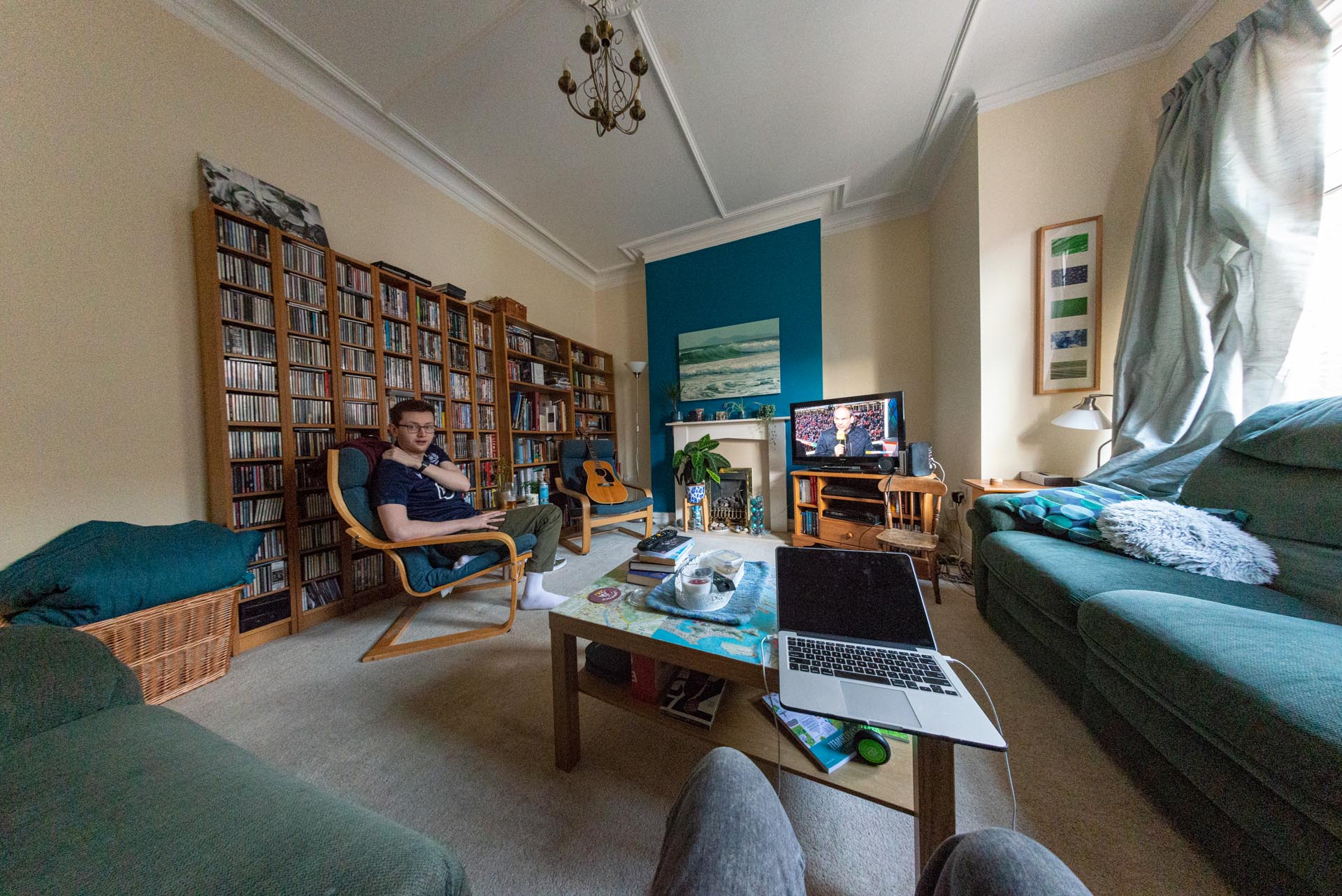 Samyang 12mm fisheye with full rectilinear correction. This is appreciably wider than the 10mm lens above. 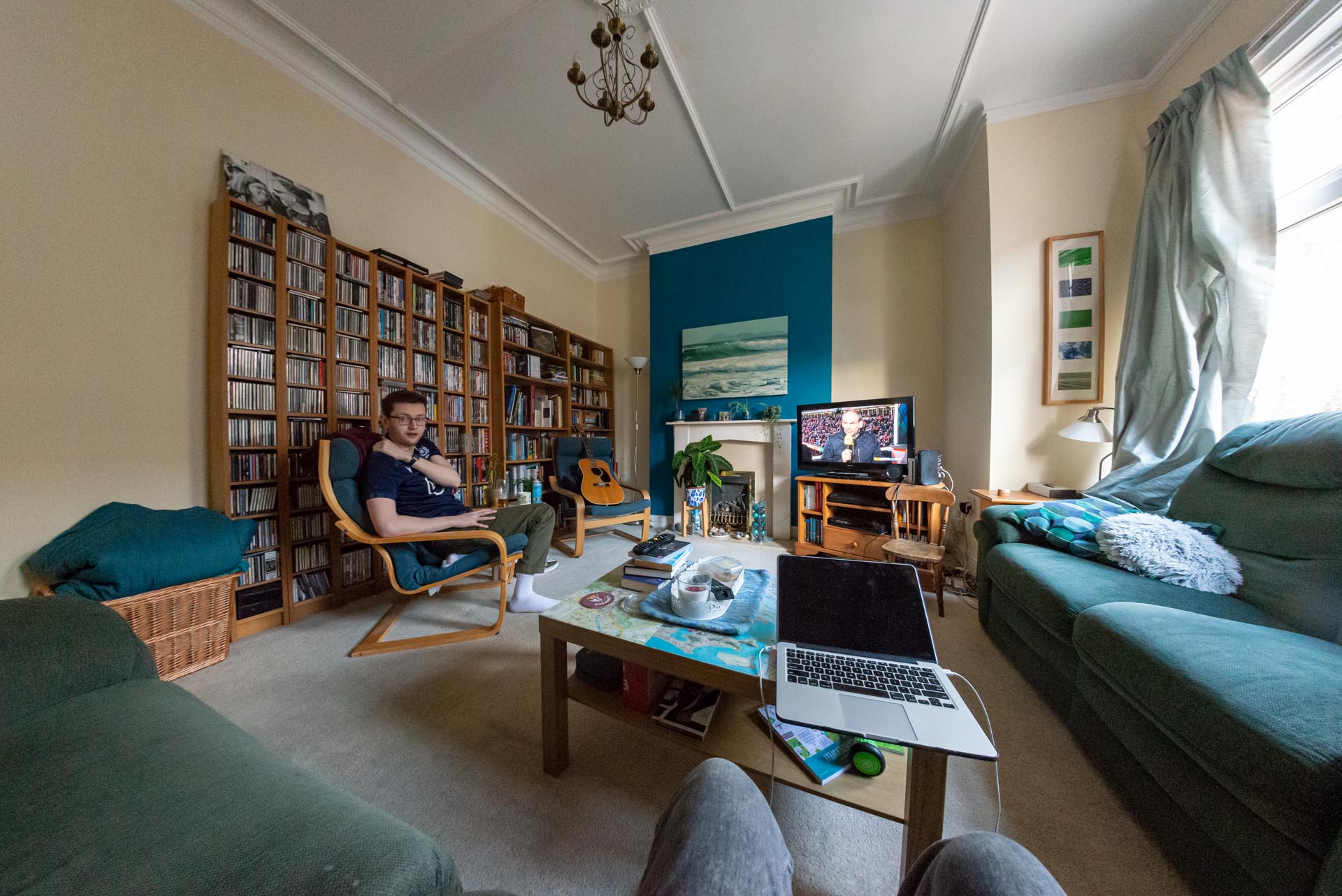 A compromise correction. This is how I very often use my fisheye. The result is a little bit fisheye, but not screamingly so, and still incredibly wide angle.

A wedding photographer's tools: So how do you use the fisheye at weddings?

Weddings are about the bride and groom, and as such lenses like the 24-70 and longer are going to dominate when it comes to the classic portraits – the mantlepiece shots. But weddings are also about the whole gathered company, and they are often about great buildings and beautiful surroundings. And that is where wide angle lenses come into their own. I want to put the bride and groom into their context in the church, and in the crowd of guests. The fisheye is more useful than many people realise. 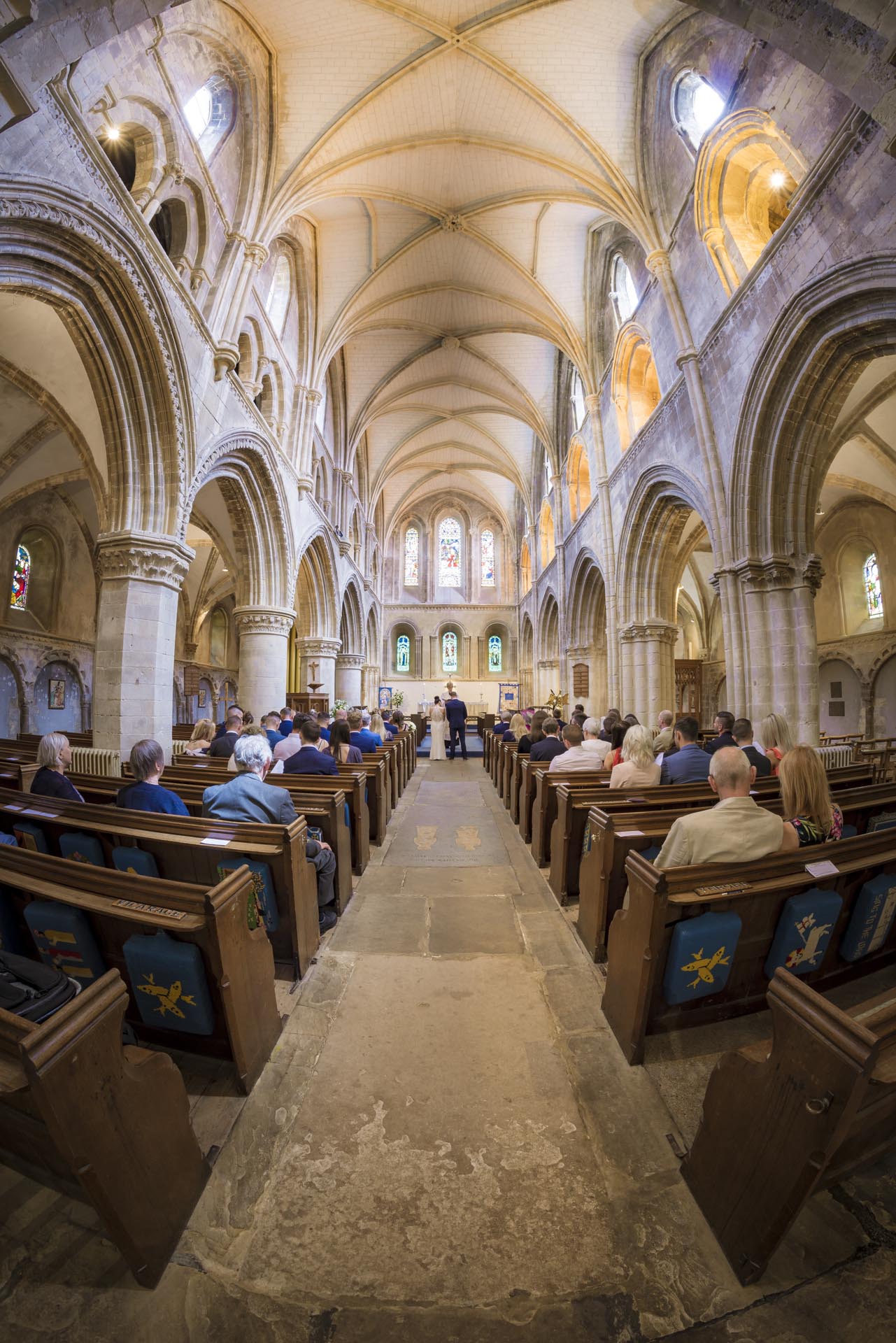 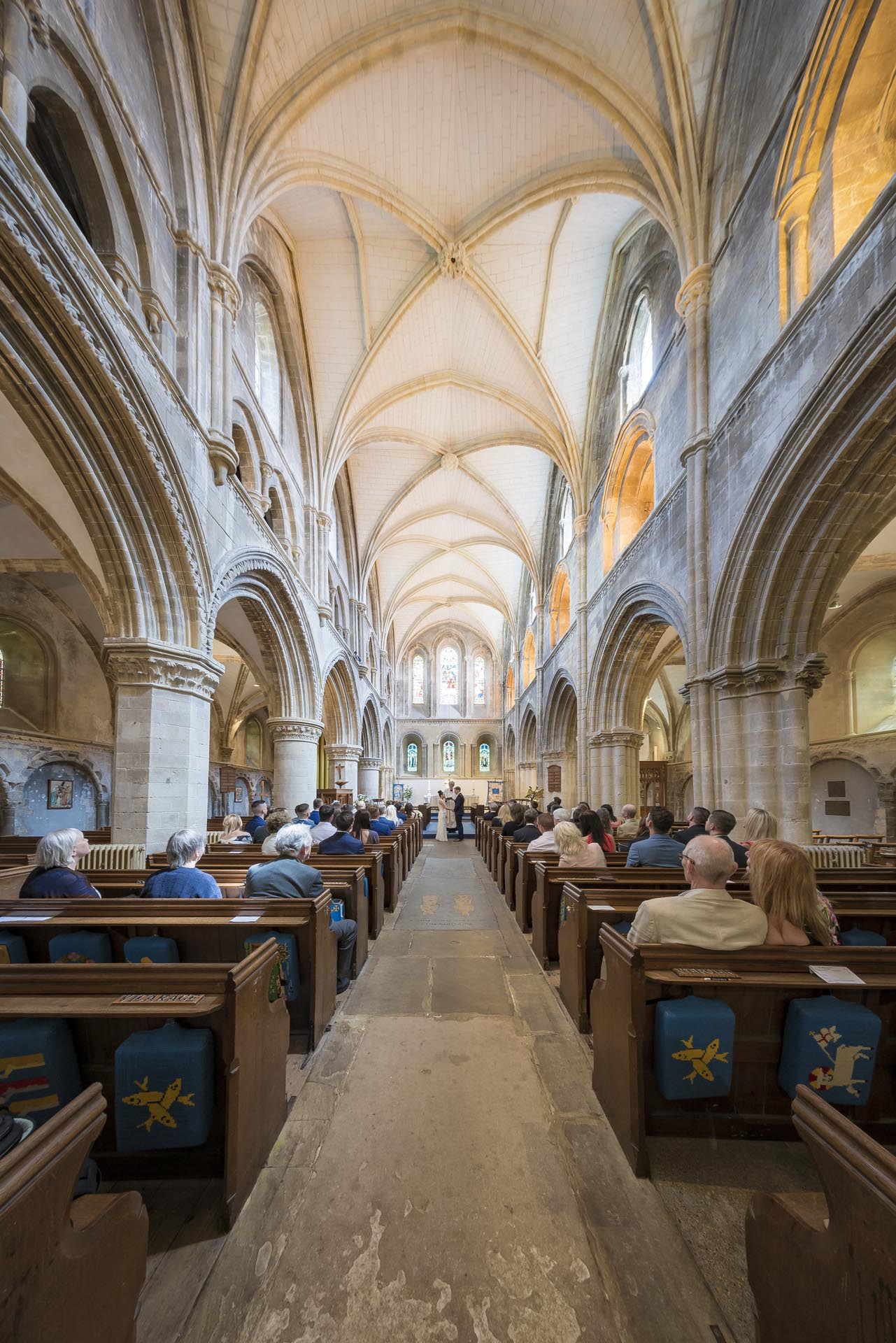 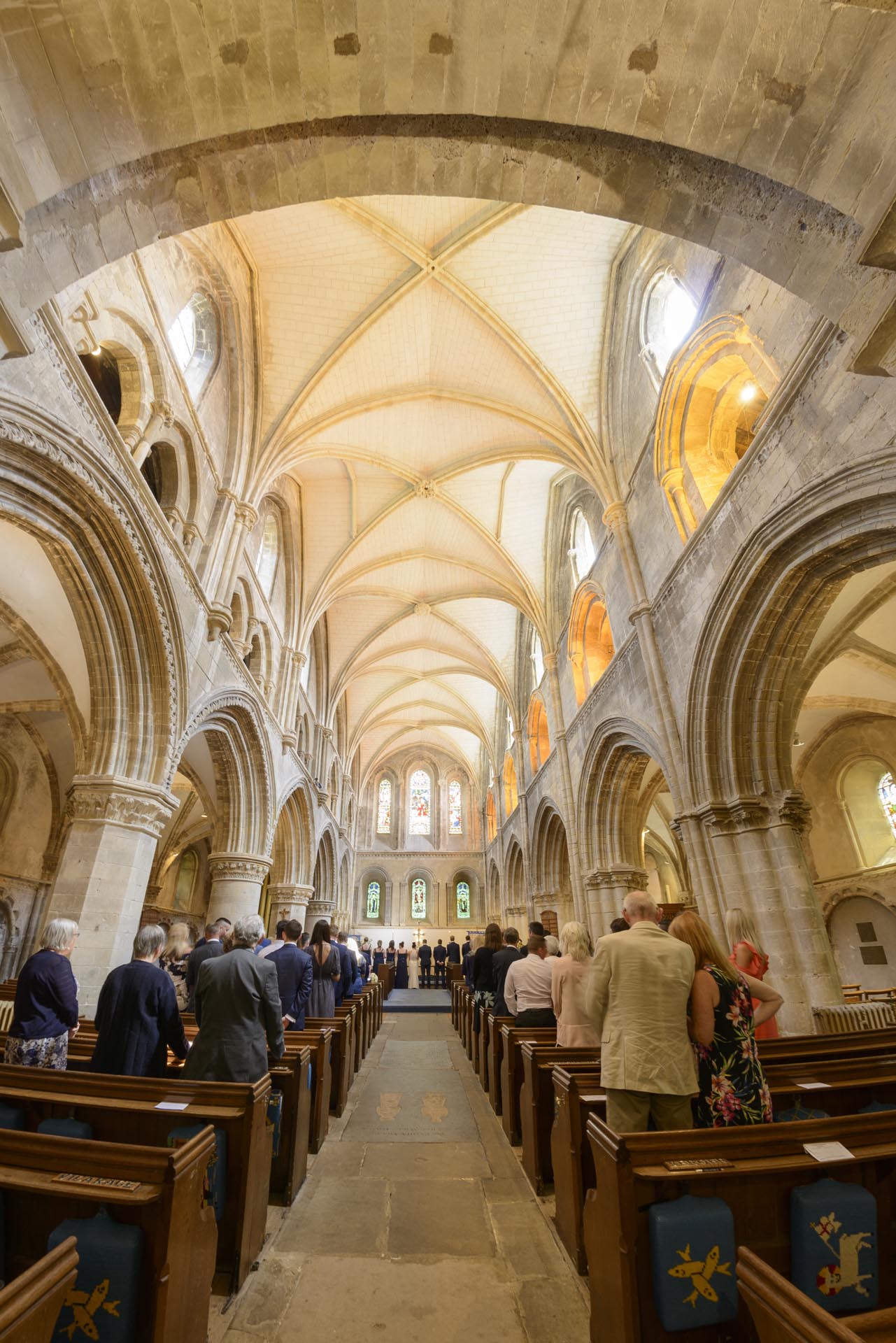 Three in the same wedding (St Mary de Haura Church, Shoreham by Sea) showing different levels of correction, and the way a fisheye can take in so much of a beautiful vaulted roof. 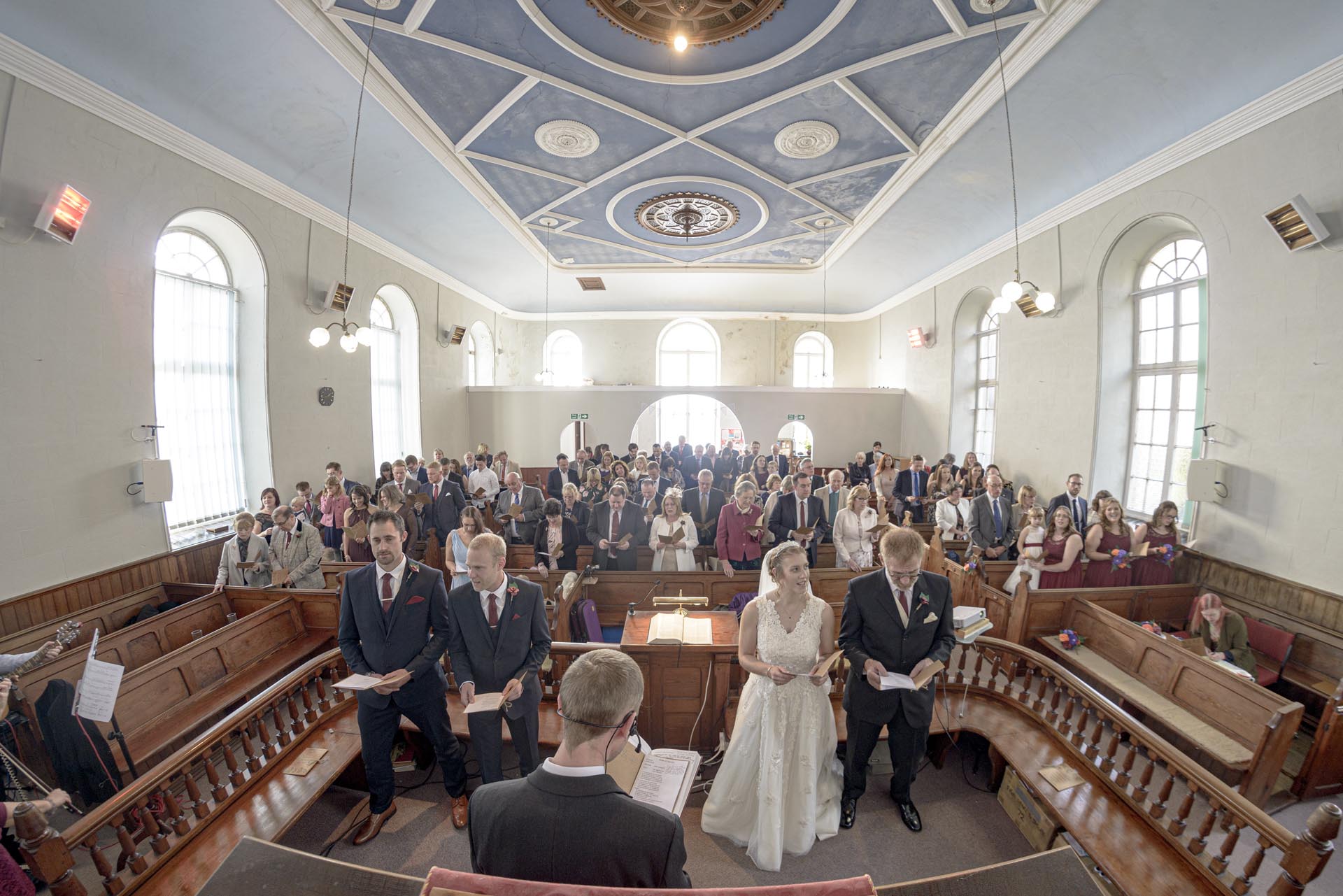 Inside the chapel for a North Wales wedding at Penrhyndeudraeth… 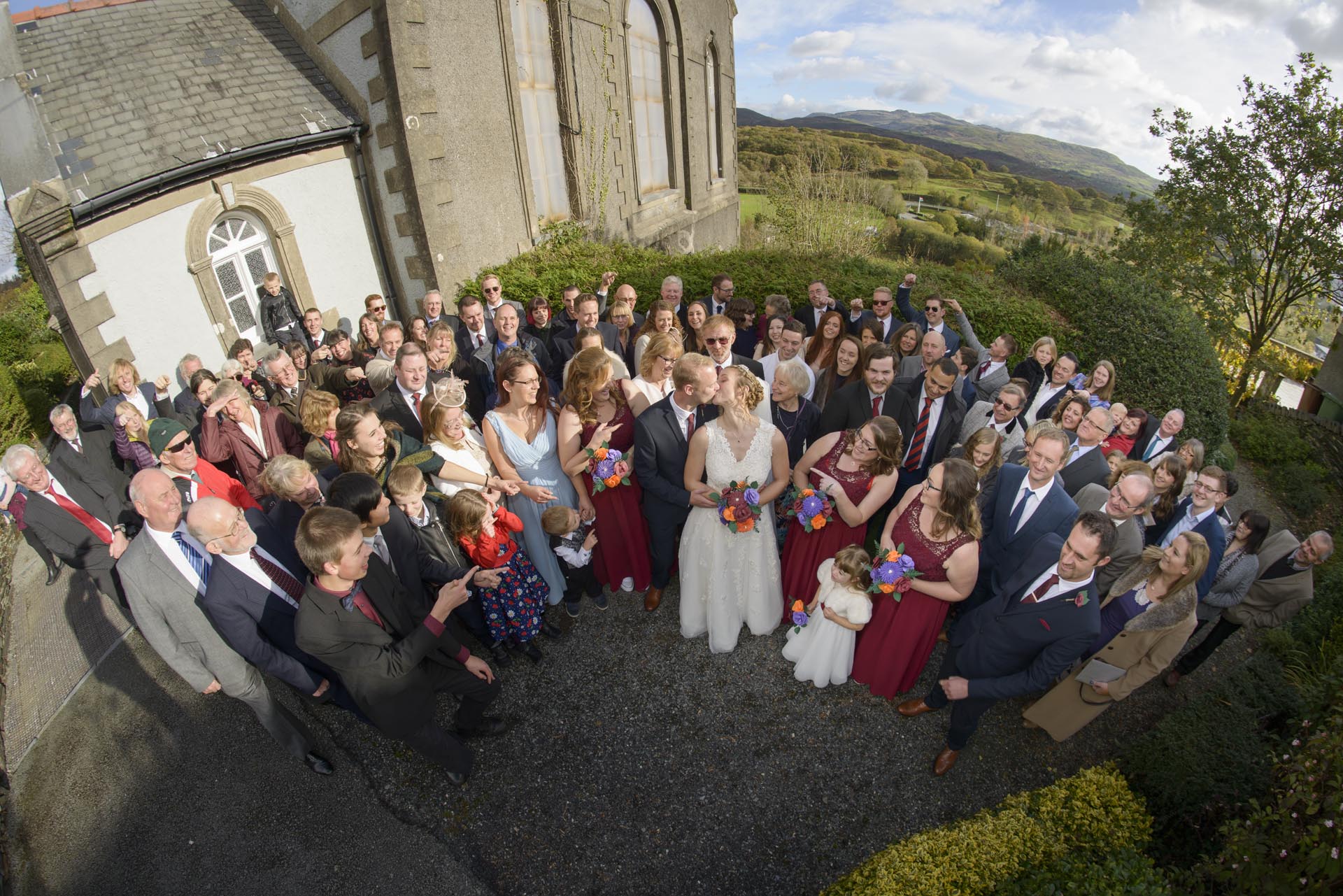 … and outside for a group shot in a fairly constrained area. I wanted to get the hills in the background in. With an angle of view this wide, one challenge is persuading everyone that they are in shot. 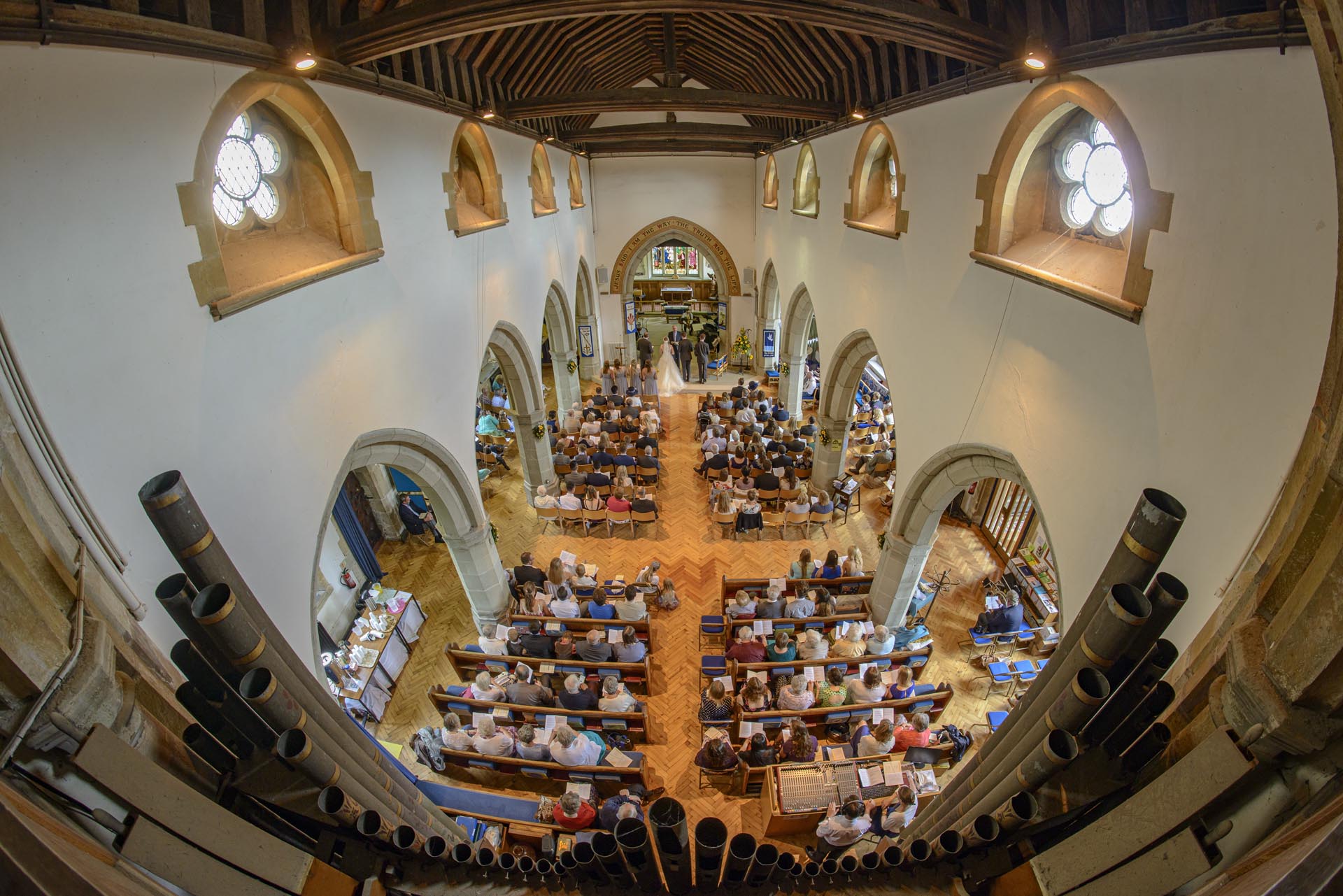 Church interior at St Mary’s, Horsham, East Sussex. I love maximising the symmetry – in this case the wedding couple and congregation being framed by the organ pipes. 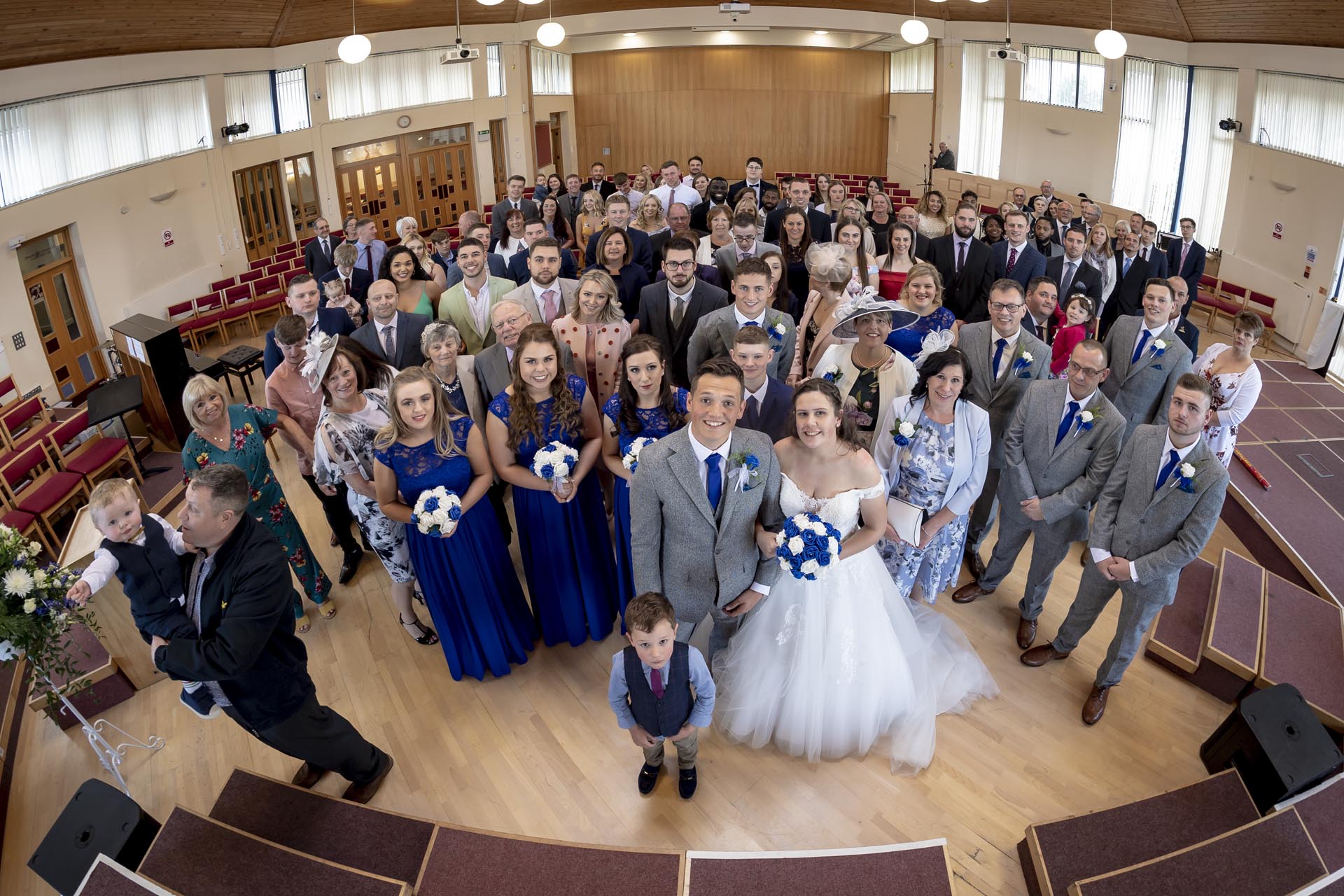 Rain kept the group shots indoors at the Salvation Army, Staines. Not a problem with step ladder and the fisheye – though once again, it is persuading people that the camera can see them that is the challenge. 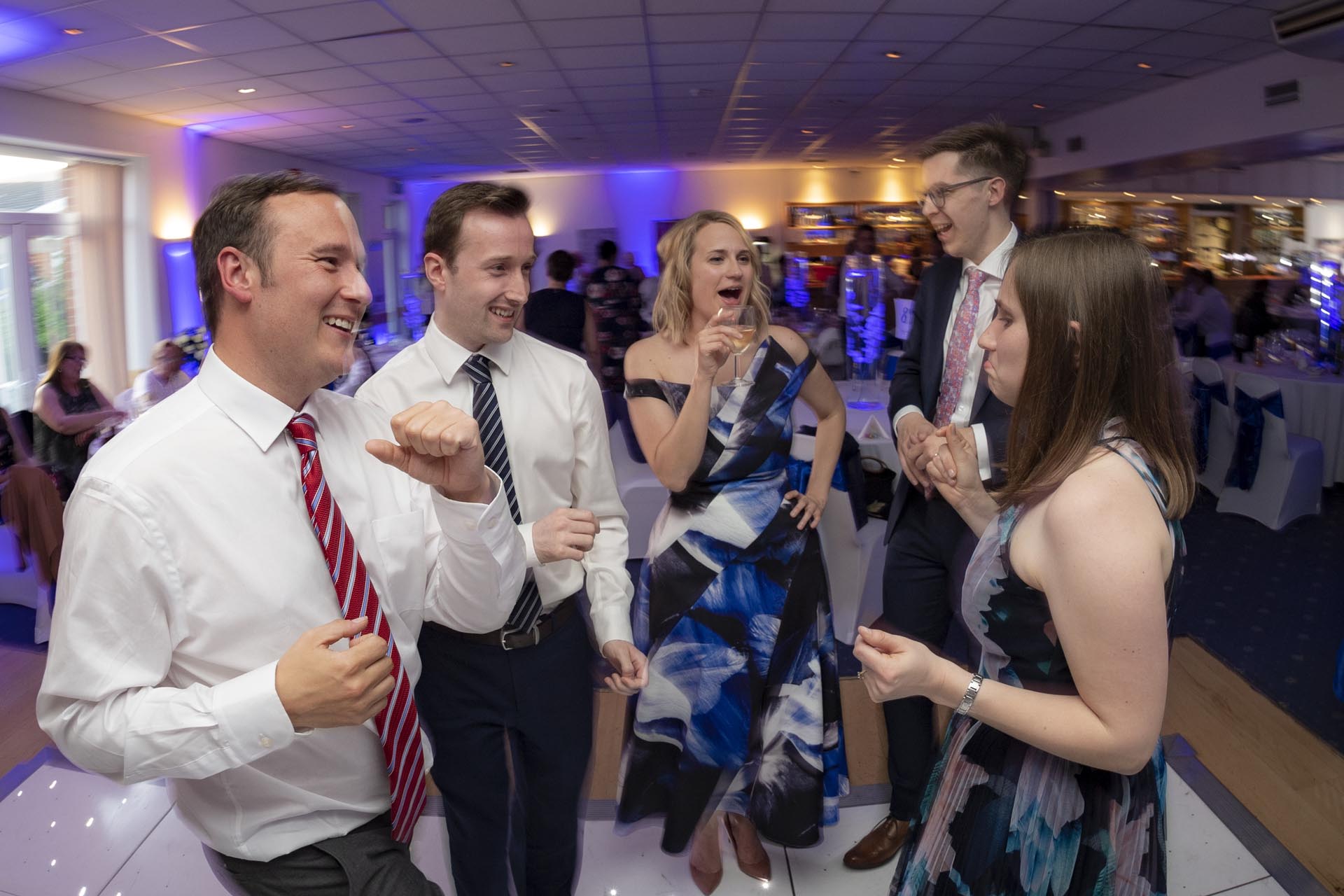 Slow rear flash, bounced off the ceiling, and the fisheye gets very close for the celebration at a reception in Hounslow.

I am fond of the fisheye for confetti shots, provided I have a second photographer also using a longer lens… 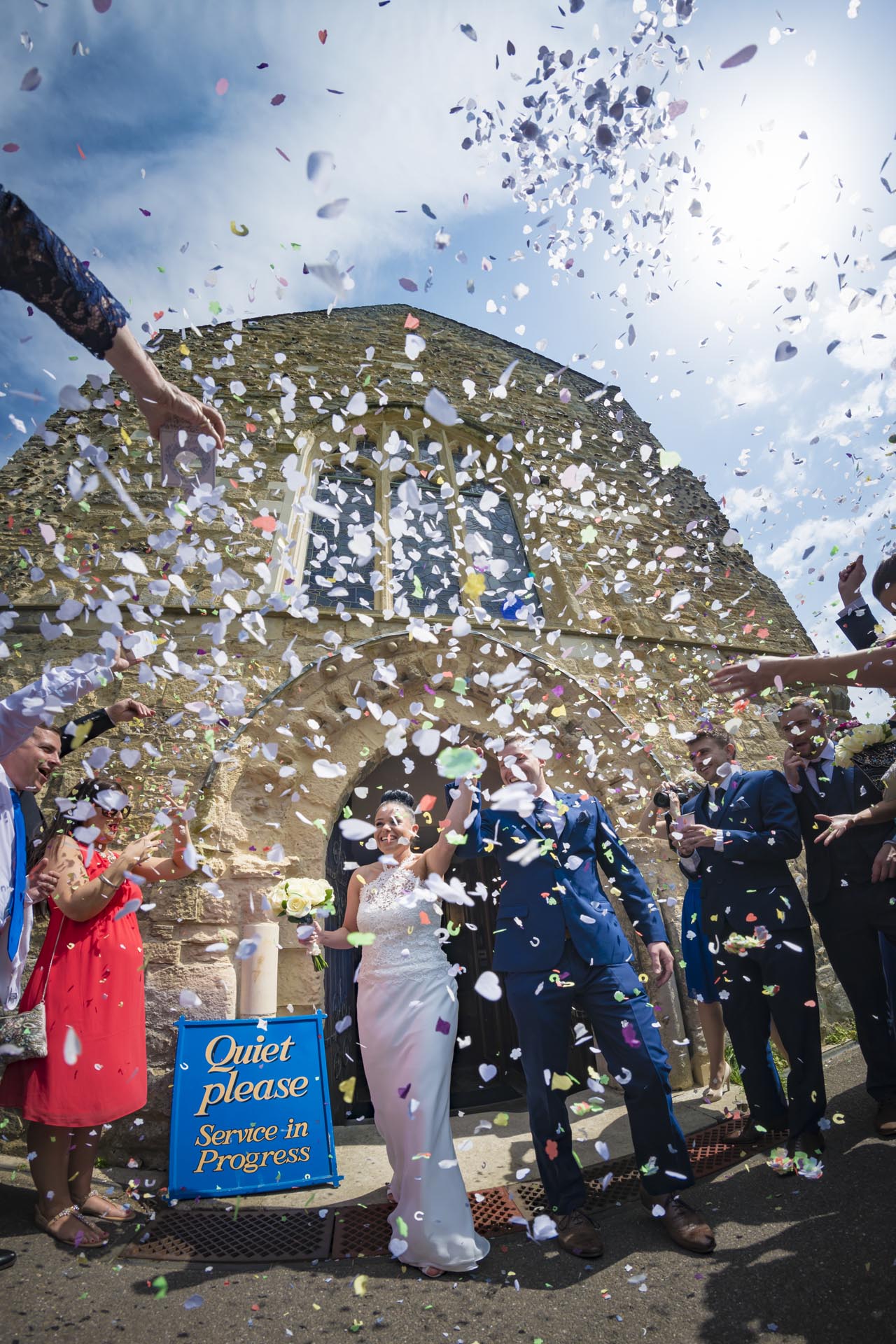 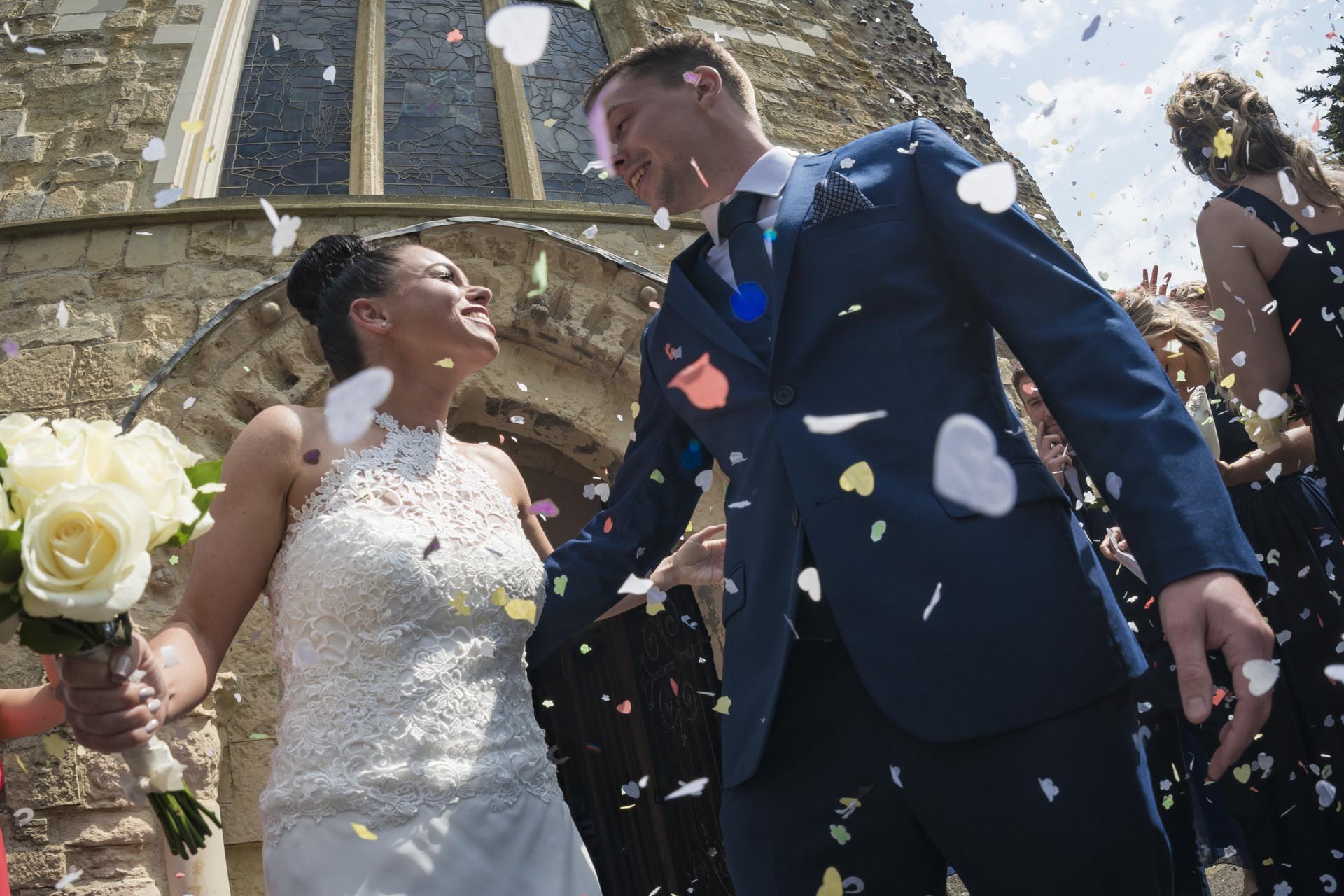 … though at this Shoreham wedding I was working alone, and trusted to my wits to get the shots I wanted with the fisheye. I know that the confetti shots were favourites for my clients. 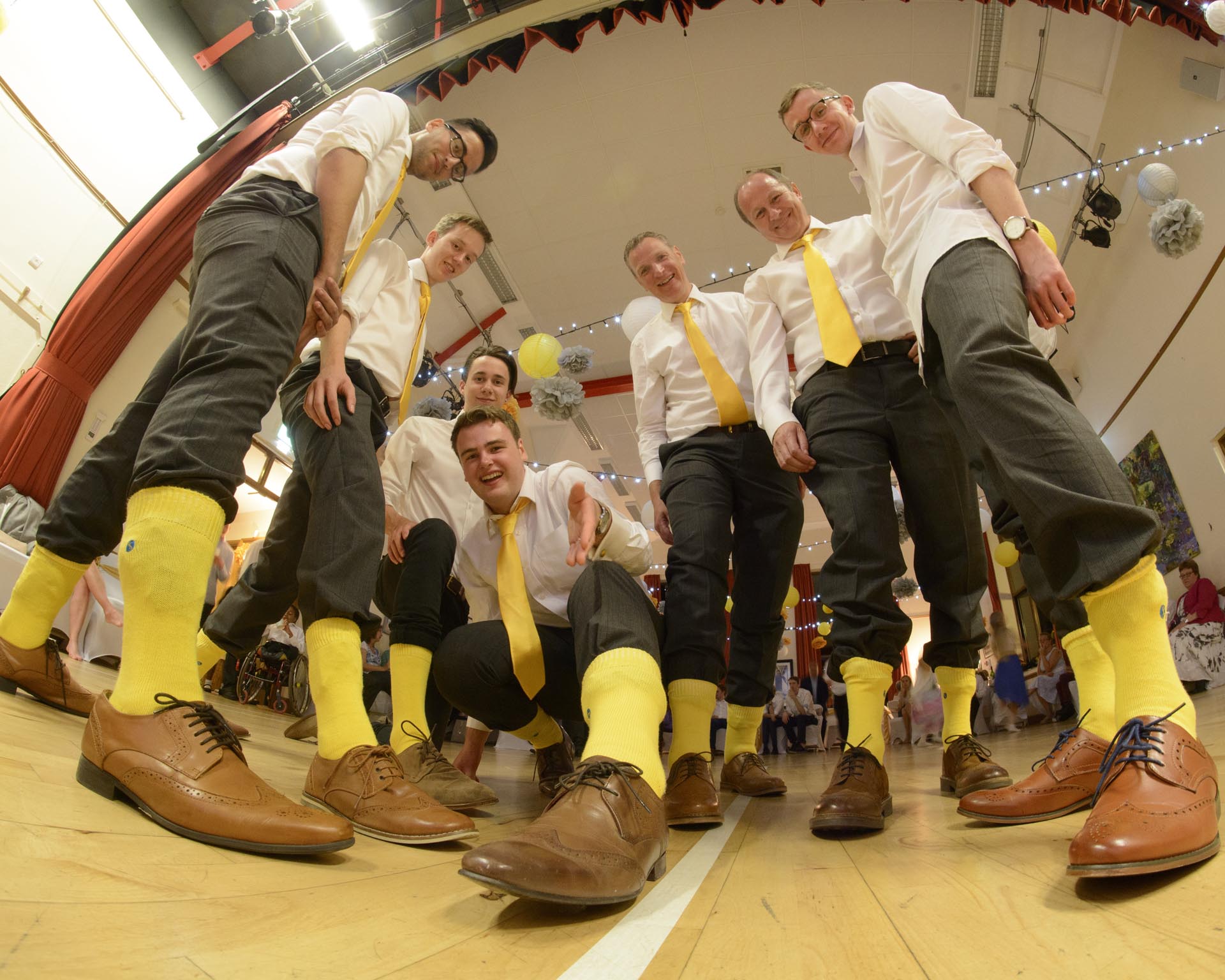 Of course, extreme distortion can sometimes be the very thing you are aiming for! 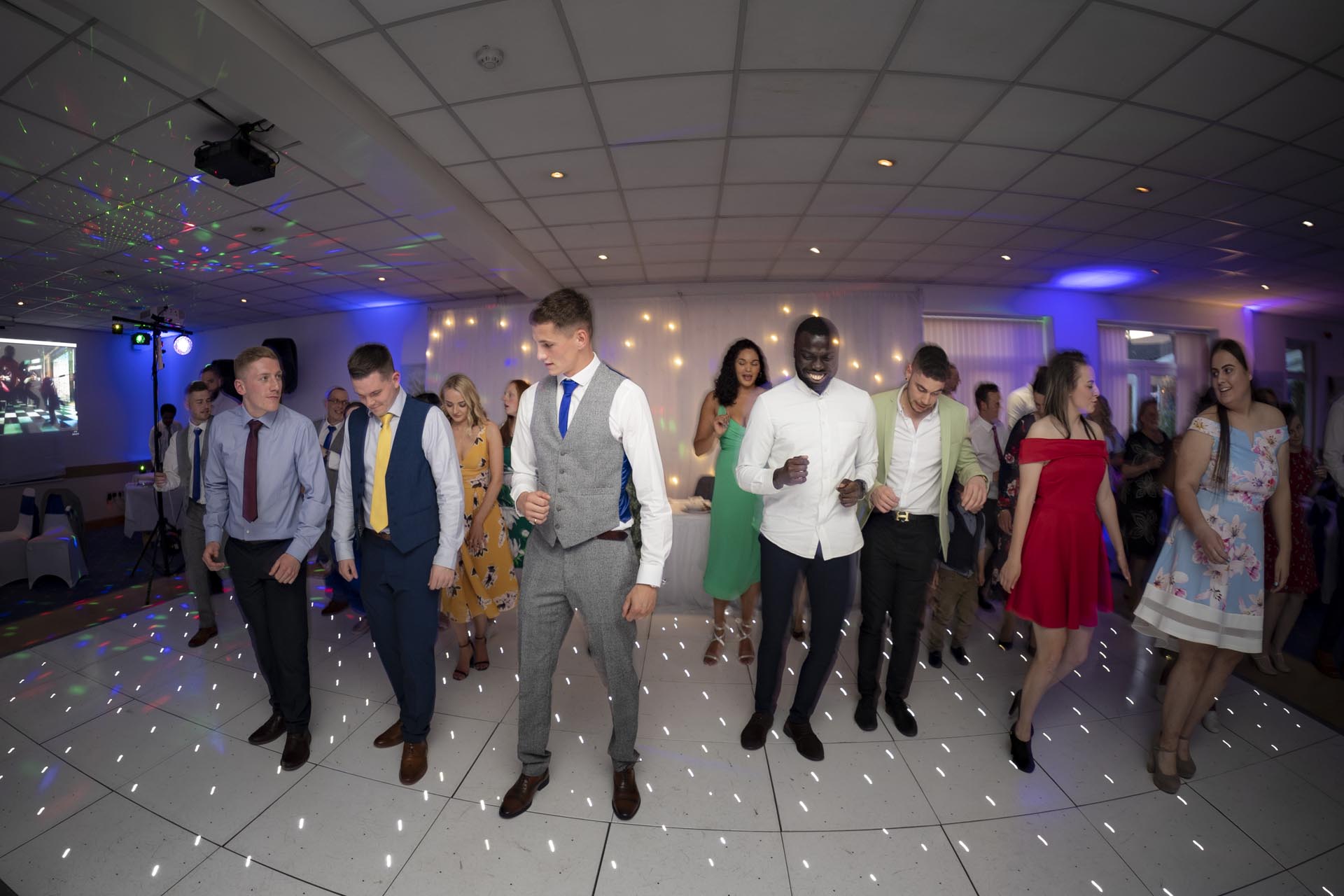 At other times it is getting everyone in shot while being crazily close to them, and without turning the people at the edges into giants. 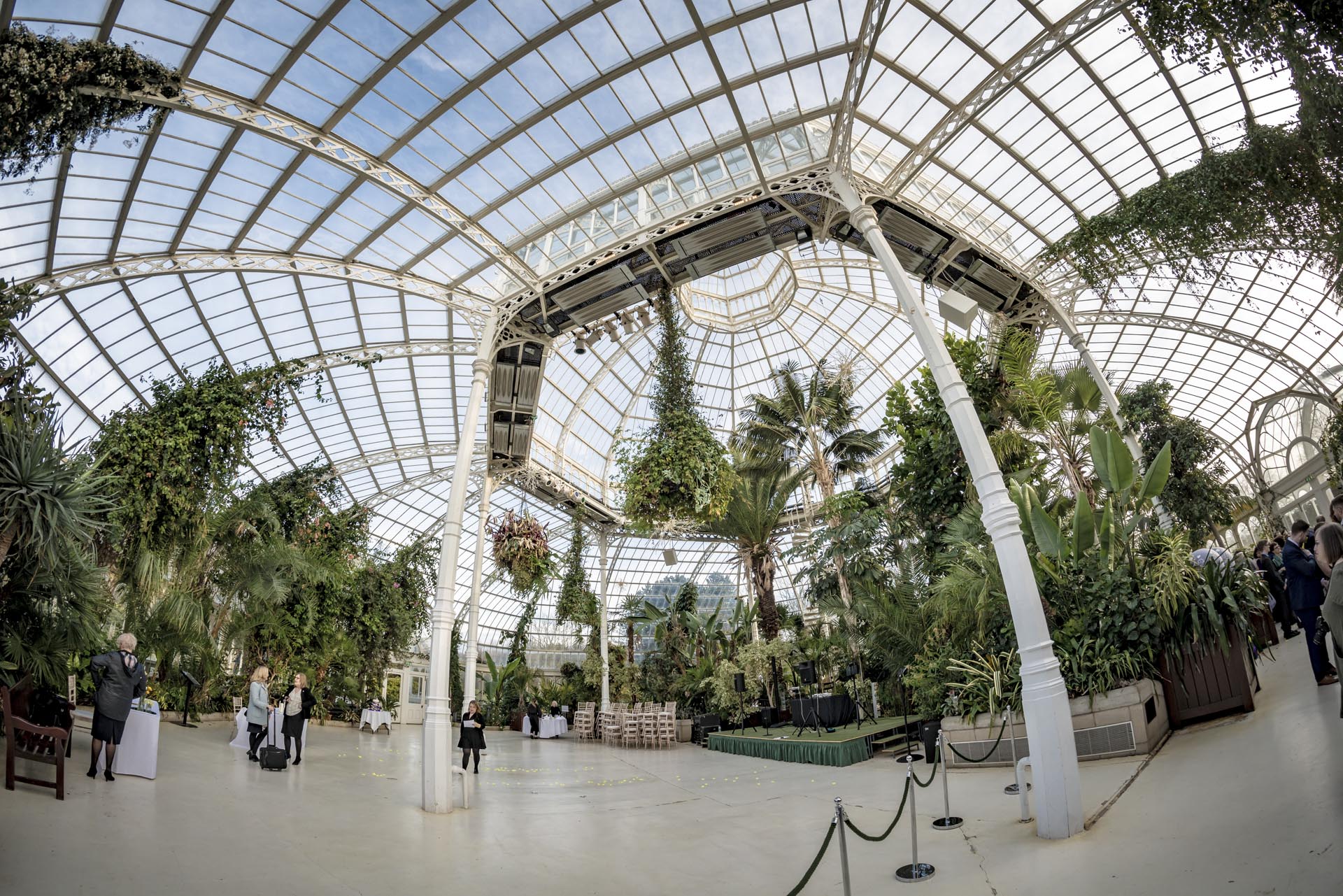 Three from a wedding Sarah and I shot at the Palm House, Sefton Park, Liverpool. This shot is almost uncorrected, and was a favourite of the bride and groom. See more on this below! 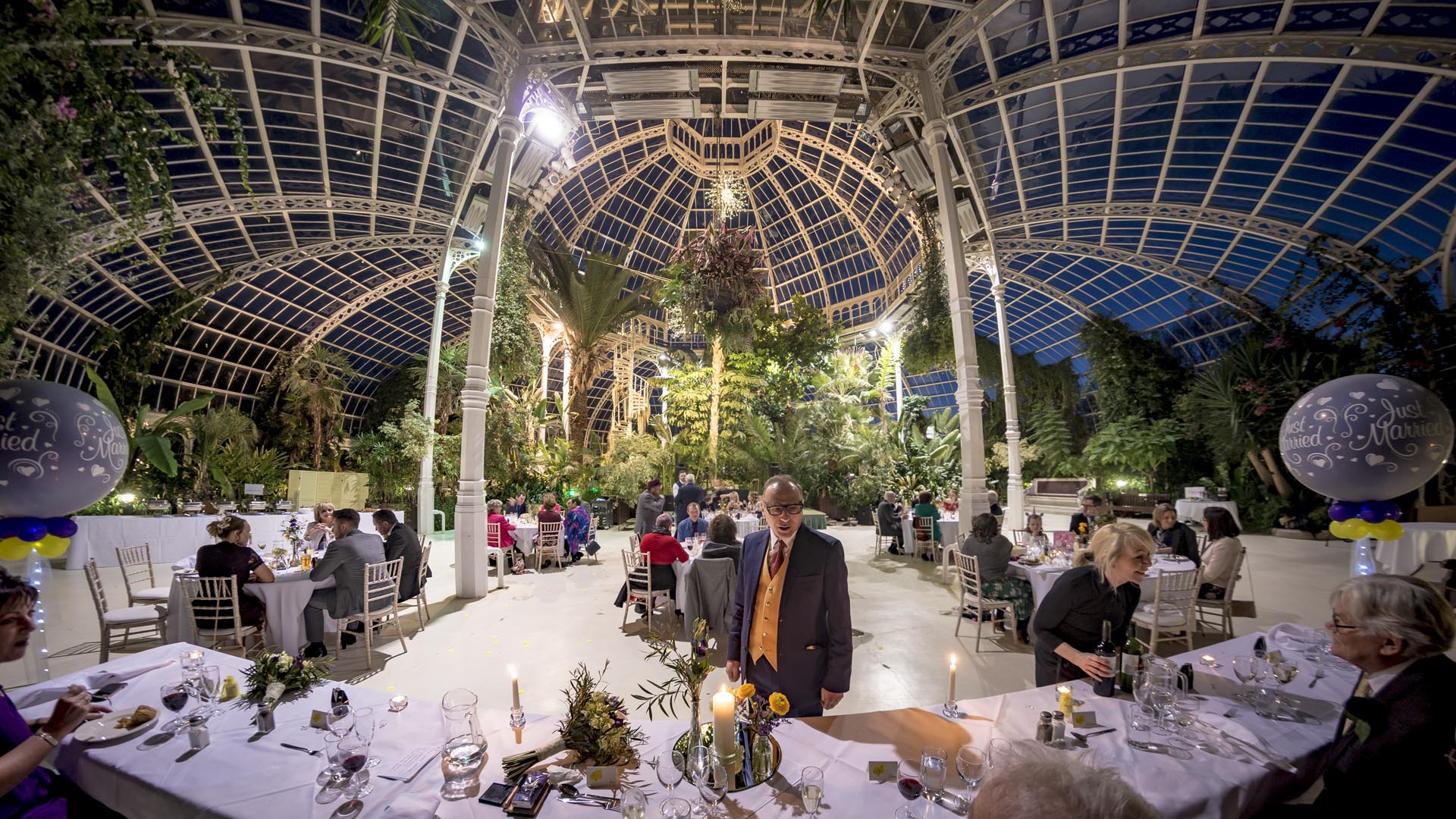 The view from the top table during the evening party. Where you have buildings that are curved anyway, or where there are few straight lines, the fisheye really sings. 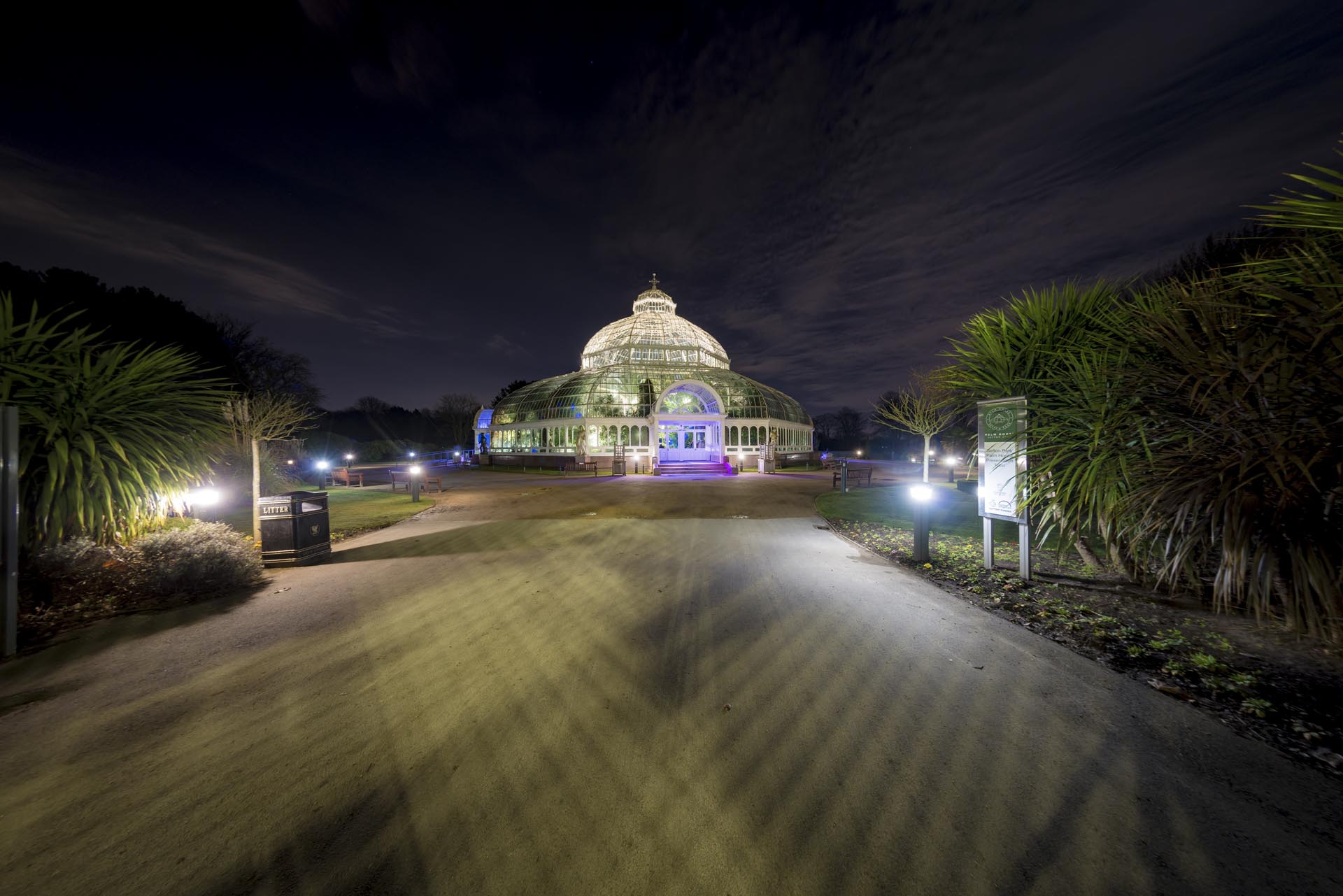 Sefton Park Palm House at night. My clients also ordered a big print of this shot. 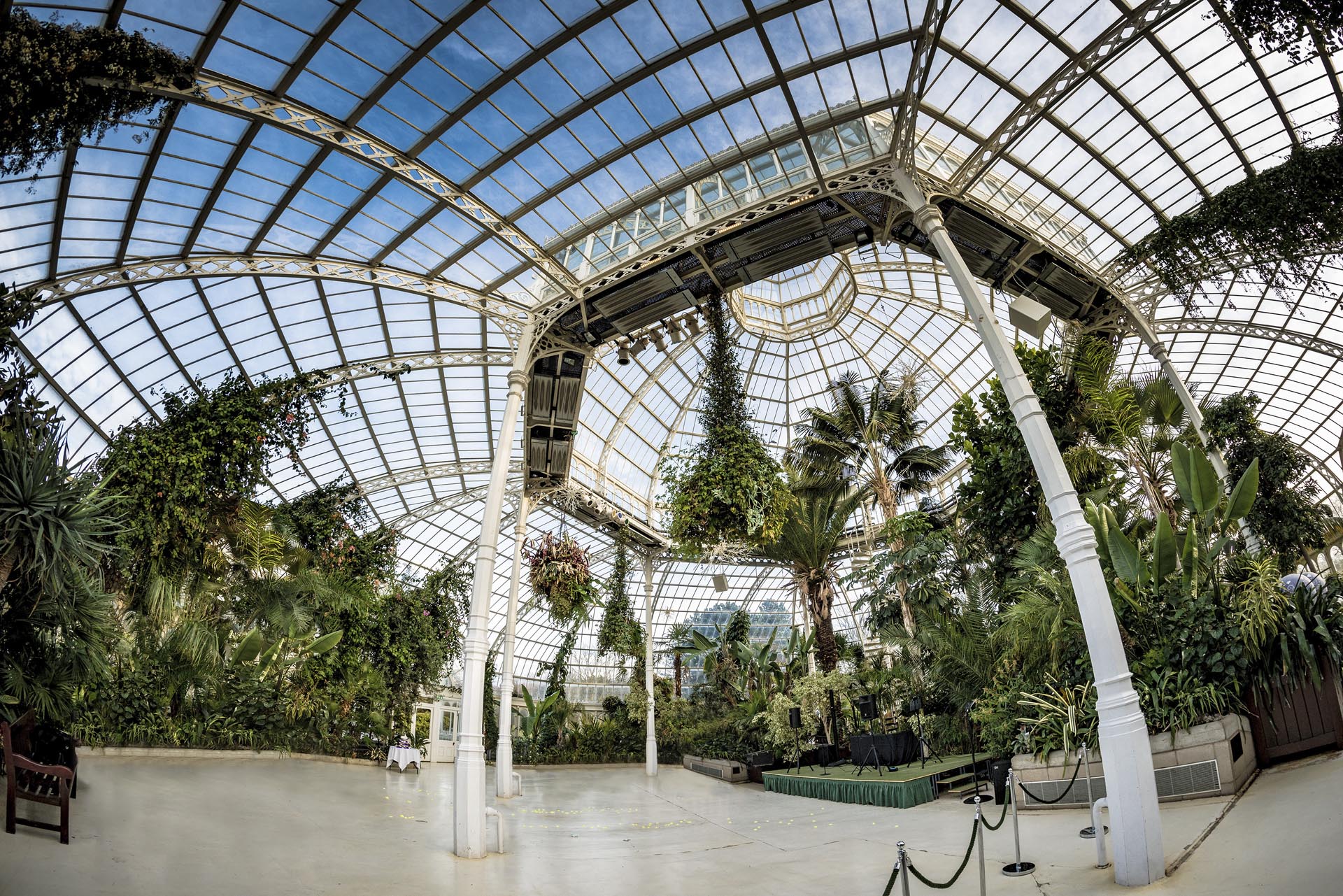 It was a good day’s work to tidy the daytime Palm House shot up this much!

Finally, a favourite group shot. Where no buildings are in shot, with those unnatural straight lines, there is greater freedom to use a fisheye, provided you work with it at or near the horizontal. This is a crop-in on a moment when the big group broke down as everyone played with bubbles. A Canterbury, Kent, wedding.

The fisheye is never going to be my dominant wedding lens. But at most weddings, my Samyang takes some shots that make the final cut. I love this lens, and I think a lot of my wedding photography clients love its results too – even though they may not be aware of quite what. special lens was used!

To contact me to enquire about my wedding photography use my Contact Form or just text (07983 787889) or email me at Andrew@AndrewKingPhotography.co.uk